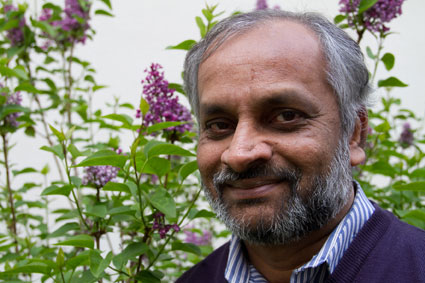 I was a student activist during my university carrier and faced the killings and disappearances due to Southern Youth Insurrection against Indian invasion in 1987-1990. I narrowly escaped from being disappearing and killing due to the situation as all the university youth were considered as supporters to the militant movement which dominated the universities at that time. I wanted to change this oppressive system and joined to Caritas Sri Lanka as a development activist and began to organize masses for social transformation. After 5 years, I was experienced this institution is not help to achieve my goals and left the organization. Then I formed the present organization with much difficulties and continued to build strong mass movement of NAFSO. While I engage with ethnic minorities, people affected by development activities, people affected by land issues, social injustices etc. my organization and personally me as the leading person among others faced life threats, media smear campaigns, monitoring and surveillance, attempt to abductions etc. In 2010, we lead a strong people movement as the convener protecting Negombo lagoon against oppressive regime at that time. I was a target of the authorities and were attempted to abduct me 3 times in 2012. I was narrowly escapes and reported to Geneva for my security while meeting the UNHRC officials there. By this time 2 of my colleagues were taken to the 4th floor of Criminal Investigation Department which is famous for torture and harassments for the persons taken there. Also, a foreign couple, [Boy from Belgium and Girl from France] were taken to CID again for questioning as they were worked, had some interviews with us and finally deported to France.

I was stayed in Paris during March – May as my colleagues insisted me to stay there for my security. CCFD-France helped me to stay at France during this period and I am grateful to them for their efforts for my security. However, I did not want to stay in Paris, France and returned to my country to work against the oppressive regime. I was one of the activist who fought against the oppressive regime to change in 2015. However, even after the regime change, as we engage in the people’s land struggles, my colleagues are followed by the CID, sometimes they are questioned by the officers, inquire about my movements, my engagements on land issues and human rights issues, issues related numerically minority ethnic groups, clashes between religious groups, issues related to the disappearances, land grabbing etc. I feel my telephone has been tapped and could listen some strange noises through my phone. Sometimes, the CID and some other security personnel send some messages through my colleagues saying “Please inform Herman not to engage such activities as before which will be harmful to him” in a friendly manner.

All these attempts are to stop my engagements of people’s issues and to keep me silence while showing they are friend to me. So, the threats are continuing.