You are here: Home / The Summit

The Human Rights Defenders World Summit 2018 will celebrate the achievements of the last 20 years and look forward to the next two decades. It is the main goal of this Summit that, 20 years from now, in 2038, a new generation of HRDs will look back and see this event as marking the transition to a new paradigm to approaching the security and protection of HRDs. 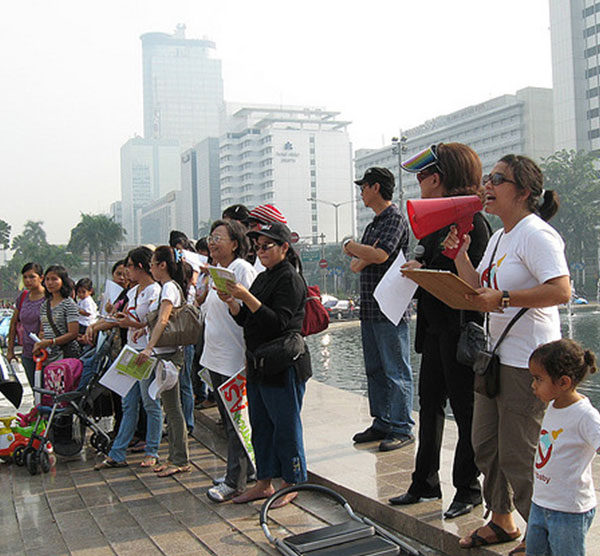 The essential role of HRDs in advancing human rights, sustainable development, democracy and rule of law, and raise awareness of the specific threats, violence and obstacles they face, with a focus on those who are particularly targeted. 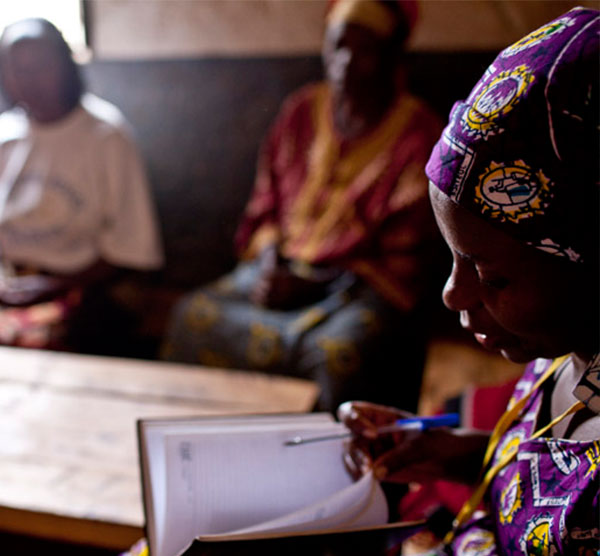 The demand from the 1998 Summit for States to “fulfil their obligations under international human rights law and to respect, and enforce respect for the right to freedom of action for human rights defenders” (see 1998 Paris Declaration), in order to ensure a safe environment for HRDs to carry out their work. 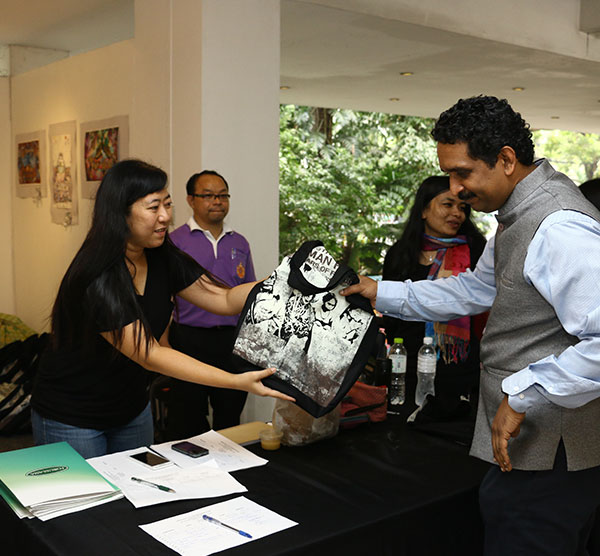 A platform for HRDs to put forward their solutions to today’s situation and propose and affirm strategies for engagement on recognition and effective protection of HRDs with a variety of actors, including focused engagement with the donor community on more effective and impactful resource allocation. 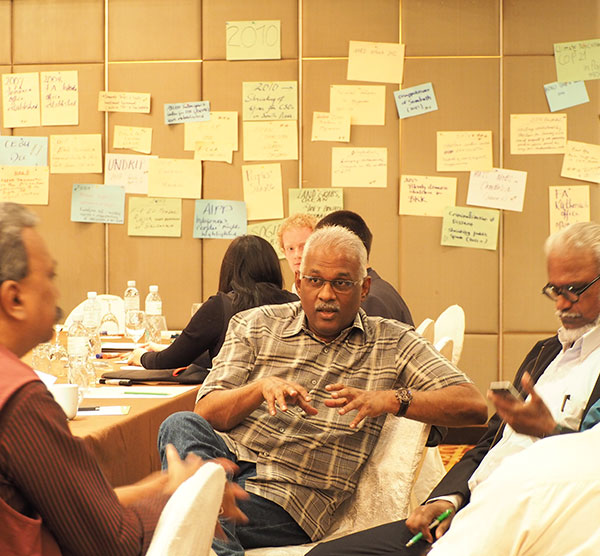 Strategies for advocacy and campaigning that do not rely on institutional responses, but instead seek to win the support of wider audiences within communities where HRDs work.

HRDs from across all corners of the world, gathered in Paris on the occasion of the Human Rights Defenders World Summit 2018, adopted a plan of action for the protection and promotion of the work of human rights defenders. 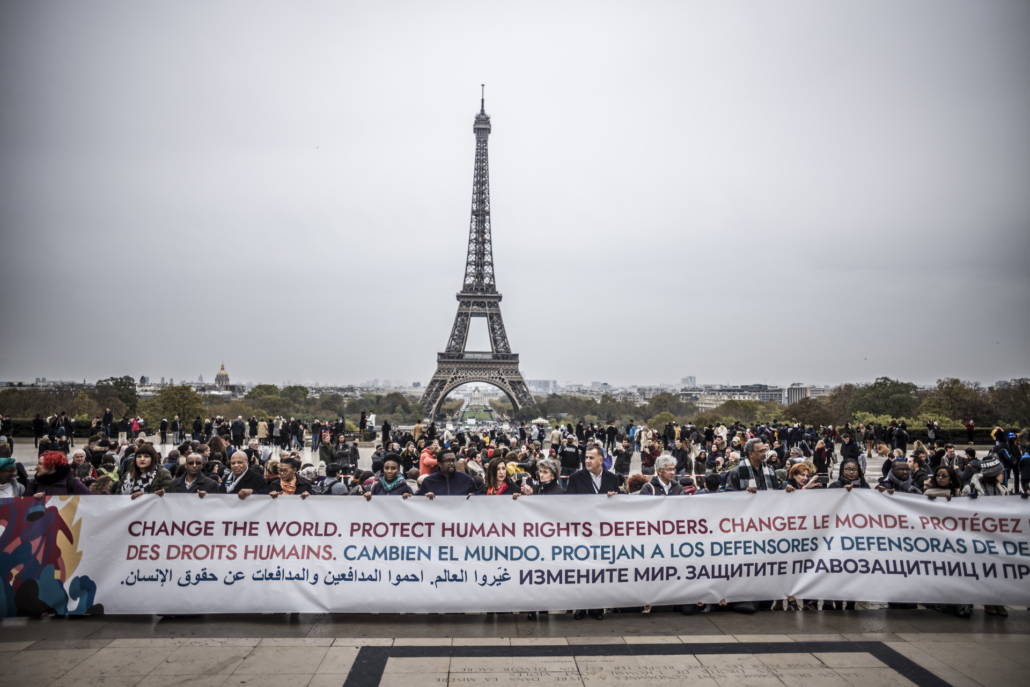 This action plan proposes a concrete set of measures and calls for a lasting commitment from States to act to protect human rights defenders and to take concrete actions to offer better protection and create a more favourable environment for their work in the years to come.

You can download the action plan here, available in five languages.

You can read the call to States here, available in five languages.

A human rights defender is somebody who demands justice and dignity for us all. Some expose corruption and call for those in power to face justice. Some demand basic services, such as health, education, housing to be widely available. Some defend the right for anyone to live according to their own gender and sexual orientation. Some are women who defend the right of every woman to choose their own life freely, without being forced into marriage or maternity. Some are farmers and communities that want to protect their land from pollution and from businesses that bleed the land dry of precious resources like water and forests. They are brave – but regular – people. And they’re under attack.

More than 30 organisations from all over the world are getting involved to ensure that the Summit
is fully inclusive and representative of all relevant issues at the global level:

With the support of

Throughout the world, conflict and fear are increasingly used to spread violence, division and silence civil society. Countries are turning their backs on solidarity and justice. Some leaders even take pride in violating human rights and are openly waging war on those who dare to stand up for what is right. As a result, the human rights defenders’ movement is today confronted with an unprecedented scale of persecution and repression.

Twenty years after the UN Declaration on Human Rights Defenders, despite the incredible expansion of human rights work, the increase in numbers of HRDs working around the world and their unprecedented achievements in some of the darkest corners, they are increasingly the targets of attacks, harassment, intimidation, surveillance, censorship, arbitrary detention, enforced disappearances and even killings – just for standing up for what is right. These threats and attacks have been accompanied by a pervasive narrative depicting HRDs as criminals, undesirables, terrorists, or as opposing development.

The Human Rights Defenders Summit 1998 put the issue of the safety and protection of HRDs on the map for governments, donor agencies, international NGOs and regional mechanisms. Since 1998, the world of support for HRDs has expanded profoundly and institutional space has been created to address HRD issues, including the establishment of the mandate for the UN Special Rapporteur on the situation of human rights defenders and similar regional mechanisms, within national governments and institutions, and among the international human rights movement.

The 1998 Summit helped create the world in which both HRDs work and in which an array of institutions, foundations and organisations engage with HRDs.

The logo of the Human Rights Defenders World Summit 2018 is a protected artwork, created by French painter Raymond Moretti, on the occasion of the 1st Human Rights Defenders Summit. The organisers of the HRD World Summit 2018 are grateful to the artist and to the rights-owner, Marie-France Moretti, for renewing the generous cession of this design again for this Summit.